If you’ve been to Ponderosa Beach this season, you already know we’re a beach restaurant located directly at the beach in Playa de Muro. We’re the ultimate Mediterranean gastronomic experience and we absolutely love it! But on our blog we’ve committed to share not only news and info about our restaurant, but also to give you some insider knowledge and tips to make the most of a visit to this stunning island we call home.

And, as you can imagine, we’re specialists in the Northern area, close to Ponderosa Beach. This is the reason why today we invite you to discover an old town in the North of Mallorca.

Discover Mallorca: this is Pollensa

Pollensa is an authentic stoned Majorcan town located in the North-West of Mallorca. To be more specific, Pollensa is tucked between two hills at the eastern end of the Tramuntana mountain range. What makes Pollensa extra special is its ancient rural feel.

Rich in history, the majority of the buildings in Pollensa were built in the 17th and 18th century taking you on a wonderful trip back to Medieval times. If you’re visiting Pollensa, there a couple of ‘must visits’ we would highly recommend you write down. 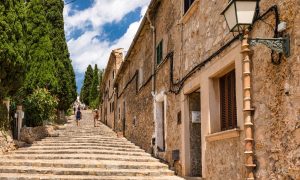 Pont Romà (Roman bridge) is located on the edge of the town and is one of the oldest landmarks in town. History says it was part of an aqueduct and its structure dates back to the 15th century. The Baroque Convent of Santa Domingo (a cloister) was built between 1588 and 1616 and is famous for its four arched corridors. The town centre and its well-known ‘Plaça Major’ are definitely a must. On the main square you’ll find the 18th century ‘Madre de Deu dels Angels’ church with a beautiful rose window. Continue to walk down the cobbled streets and find many other historic buildings until you arrive to the 365 steps that’ll take you to the Calvari church.In addition to several landmarks, Pollensa is also home to some of Mallorca’s most authentic celebrations: the Pollensa Wine Fair, ‘La Patrona’ festival with the re-enact mock battle between the Moors and the Christians, the Pollensa Classical Music Festival and more.

If you ́d like to work with us, send us your CV